How did you meet?

Britt and I met through a mutual friend at Exchange Bank in Windsor, California where Britt was the manager and I was a customer. Our mutual friend, Andre, was an employee there and knew both of us. It was a Tuesday afternoon in October 2004.  Andre ended up introducing me to Britt’s work area before he was even in it. I was stunned at his “big” desk! That caught my eye. It was the biggest desk in the bank. I loved that!  I met Britt a few minutes later. He fit the desk nicely. Big Biceps, big desk. Handsome man, it worked. I told him I needed to open up a few accounts. He told me to sit down and he would help me do that. I urged him to get me stellular rates and terms. I didn’t even know what that meant! But, I knew it was important. so the words came out of my mouth. I also concocted a plan to make sure that happened. I told him I’d make it worth his while. I stood up, walked to the side of his desk and ducked underneath. Like I said, it was a very big desk with lots of space to maneuver around. Not to give away all the juicy details about what happened that afternoon when I was under Britt’s desk…but let’s just say, not only did I get great bank rates and good customer service with a smile, but also I scored a “first date” out of it. We went to dinner the following week. That is how we met! 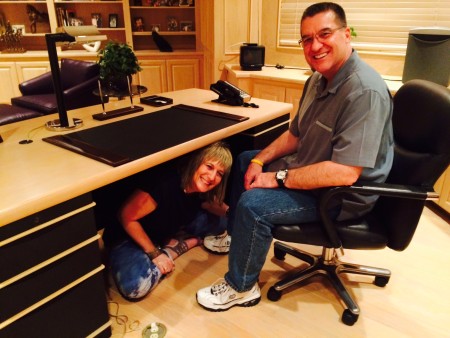 How did your relationship develop into Marriage?

Our relationship developed into marriage very cautiously and in stages. We started out unusually slow, seeing each other once a week, dinner and/or a movie, maybe a coffee date. Relatively short time spans. We didn’t want to speed it up for a few reasons. First, we were both coming out of other relationships, so we didn’t want the pressure; and second, and more importantly, we both had young children to think about. That was huge issue. We were worried about how the kids would see “our” relationship. We’ve actually been compared to the old TV show, “The Brady Bunch,” minus two.
The children now needed to be part of our relationship…they needed to meet and see if we could “blend” the two families. It was a very hard task for both of us. We ended up introducing the kids on New Year’s Eve at a party at my house. The families met. It was a success!
Next step…the families getting to know each other. Hanging out on weekends, traveling a little together on a weekly/daily basis. Our goal was  to get into a groove or routine with a schedule with the kids. For the most part we succeeded!   Now, a few years have passed. Britt asked me to marry him. We talked to the kids, got their approval and I got my ring! We married in September 2006. We dated for two years before tying the knot. A few months longer than Dr. Laura recommends in her book. It was the perfect length of time to get to know someone before making a lifetime commitment.

Did you have any surprising (unusual, unique) challenges or issues and how did you manage (resolve) them?

Britt and I did have a few surprising and challenging issues to deal with along the way. Kids would be #1 on the list. When you are dealing with 4 children under 18 it’s not an easy task for anyone. You then get into the issue of step parenting, which is very difficult, especially if the exes/biological mom/dad are around. Co-parenting is a learned skill. Mingling all the family members takes lots of practice, patience, communication and understanding with each other. I am still working on it!
To resolve kid issues, this is what works for us. We basically deal with our own in terms of discipline, schoolwork, activities, and the day-to-day schedule. Britt handles his kids and I handle mine. It’s as simple as that.
Another challenge that comes up is money. It is not an issue, just an unusual situation. Since this is a second marriage, the finances work differently. This is what works for us. We split the household expenses. He pays for his kids and I pay for mine. He takes care of our major finances outside the home, i.e.…vacations, dates, weekend spurges. And, I pay him back in other ways!  I just want to say, we never argue about money.

How you create your wedding to match your style?

Our wedding was a dream come true. We planned it together. Both of us wanted a small ceremony in one place and a big party in another. We love the beach and the coast, so Monterey was the spot! It was a family only weekend. Britt and I planned the entire ceremony: the venue, food, drinks, flowers, photographer, music, etc. Overall, it was very classy.
Our blow out reception followed two weeks later at the Trentadue Winery in Geyser Ville. It is in the Northern California Wine Country. A few hundred friends and family joined us for cocktails and dinner, champagne toast, cake, music and dancing. It was a great way to have all our friends share in our special day!

What was unique and different for you as a couple?

Many people have told us we are unique. Kind of different than your average couple. Beside the fact, we are both on marriage #2, and were married for the exact amount of time, both of us have two children about the same age, we have many people fascinated with our lives due to our careers and how they interconnect. Let me explain. I am a radio broadcaster on a morning show. Britt is a banking executive at a company that advertises on the radio station. We all know each other. Kind of incestuous really. My entire life is broadcast on the radio. I talk about Britt on a daily basis. That is my job. Britt is even a character on the morning show. I call him “Banker Boy.” I have gone through both pregnancies, both marriages and one divorce on the radio. I even had a “live” baby shower with listeners on the radio. And, “Banker Boy” has a custom license plate on his Mercedes (car) that says “BankrBoy!”
Not many couples can say they are “local celebrities” on the radio. People think they know us personally because of the airtime on the radio…especially me. I have been on the radio in my hometown for 19 years! That’s a lot of broadcasts. This is what makes us an atypical couple, portraying our lives and the lives of our families airing all our dirty laundry for everyone to hear!

Do you have a Real Wedding Story to share?  We would love to have your story featured on our website!