How did you meet?

Rick and I met on American Airlines flight # 4115, 5:20PM from Chicago to Milwaukee, December 16, 2011. Rick was on a return trip to Albuquerque from a Medicare meeting in Baltimore when he decided at the last minute to divert to Milwaukee for a one-night trip to deliver Christmas presents to his daughter’s family. I was headed to Milwaukee (my birthplace) for a long working weekend to do a blitz remodel on my ailing father’s home so that it could accommodate home health care professionals to care for him. His health was rapidly declining as he wassuccumbing to the effects of dementia.

The plane was a small, RJ 145 regional jet which meant that it was very cramped quarters- one seat, teeny aisle and two more cramped seats across the way. Rick was sitting across the aisle from me in row 11 and the woman seated next to him was from Portland. She struck up a conversation with him and launched into great detail about the types of plantings he should select for his desert home in Scottsdale. In desperation, he looked to me and started up a conversation about my iPad since his daughter had just given him one. We spoke briefly on the flight (I travel so much that I almost NEVER talk to people on planes.) and then on the way to baggage claim as we walked together. He seemed like a nice man and I offered to drop him at his daughter’s. He declined but by the time we got our bags, he had asked for my business card that led me to believe that he was interested in calling me for some consulting for his practice group.

The next day, he sent me an email and we spoke briefly by phone over the next couple of days and in the course of those conversations he let me know that he wasn’t interested in business. He asked if he could come to Seattle to see me the weekend after New Year’s Eve.

I thought it was a very bold move to fly across the country for a long weekend date with a woman with whom he had spent a total of one hour. Of course I too was somewhat skeptical that we might have the basis for a successful long weekend much less a long term relationship. Since I live in Kirkland, I suggested that he stay at the Willows Lodge. I met him Thursday night there for wine after work and immediately was very pleasantly surprised that he was as handsome and nice as I remembered.

Friday after work, we went to the Henry Gallery, specifically to see the James Turrell’s Skyspace because Rick has a special appreciation for Turrell’s work. We also went to the Seattle Art Museum and then had appetizers at Seastar restaurant in Bellevue and dinner at Cantinetta. On Saturday, Rick had prearranged a private appointment at Chihuly’s workshop and show room in Ballard to preview an installation that he was considering for his Scottsdale home. While there, we saw the glass installation in process that would ultimately become the ceiling of Chihuly Garden and Glass at the Seattle Center.   Little did we realize at the time how significant that installation would become for us. We were very impressed. Our tour guide Andy also set up a tour of Chihuly’s Boathouse for us. We were intrigued by the massive collections that Chihuly had staged on every available surface. These collections would ultimately become the decorative elements in the Collections Café at Chihuly Garden and Glass. Somewhere in all the tours and Chihuly pieces, we realized that more than just the art was something special.

Later that day, we went sailing on Lake Washington with some of my friends and took in a show and dinner at Jazz Alley. By Sunday we knew we had the chemistry to last long past a weekend and while we watched our first Sunday football game together we planned my visit to Scottsdale for two weeks later. Sunday evening we had an inspirational meal at The Herb Farm restaurant. Needless to say, the weekend turned out to be a far different experience from my initial, skeptical thoughts. We found it hard to part when Rick left on Monday for home and we have been pretty much inseparable since that weekend.

How did you get engaged?

Although we had been planning the wedding for several months, we were officially engaged on Dec 16, 2012, one year to the date that we met. Rick arranged for a romantic weekend getaway and proposed in the incredibly beautiful setting at Post Ranch Resort in Big Sur CA. He couldn’t wait for all the special arrangements he had set up for the evening and proposed before breakfast in the morning. We spent the rest of the day enjoying the coastal sites and being amazed at the chain of events that had led us to each other. That evening, he had a gourmet dinner brought into our ocean view room and arranged for a classical guitarist to entertain us during appetizers and champagne.

Where was the wedding?

The wedding and reception was at the Chihuly Garden & Glass Seattle Center, Seattle, WA – February 2, 2013

What is your favorite memory of your wedding or what would you like readers to know most about your celebration?

Our wedding was memorable for many reason and we joke that ours is likely one of the few weddings where the guests sent “Thank you” notes to the bride and groom. We didn’t just have a wedding; we had a wedding weekend since we had guests who came from 22 states and we wanted to show them the unique and amazing city we live in. Also, we chose venues and activities that echoed our first weekend date the year prior. And we included friends and friends of friends as much as possible to give everything a personal touch and meaning. We also took care to make logistics as simple as possible for our out of town guests and had bus transportation arranged for many of the events which added to the merriment and sense of family.

Friday evening we arranged “A Night at the Pink Door” complete with an incredible array of the best of The Pink Door’s menu, a trapeze artist and Diana Page Jazz band. (Diana is a personal friend.)

We also booked a block of rooms at the Marriott Waterfront to encourage out-of-town and local guests alike to enjoy the downtown and waterfront sites and experiences that make Seattle special. We ended up having about 38 rooms there including the Presidential Suite.

Saturday, before the wedding we arranged two tours for our guests to tour Chihuly’s Boathouse on Northlake as an introduction to his work.

The wedding itself at Chihuly Garden and Glass was stunning. We intentionally selected a simple color palette and mirrored table tops (steel grey, white, silver and black) to amplify the amazing colors on the ceiling. The food from the Collections Café was spectacular and befitting the very best restaurants in Seattle. Our menus for all events focused on NW food items and the wines we selected were also from the Northwest. 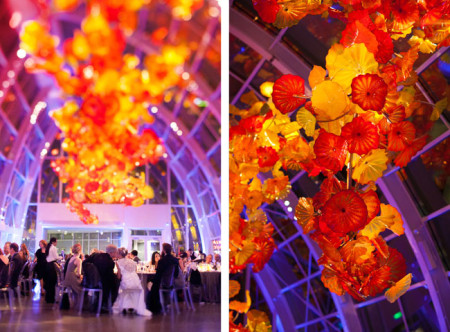 While guests arrived we had a string quartet playing (also friends of friends) and they also played the ceremonial music. A long-time friend and minister, Jack Stowell from Portland, performed the ceremony. My daughter, Naomi who had been just been married December 29 was my Matron of Honor. My son, Stefan was my “Bride’s Man” and walked me down the aisle. Rick’s Best Man was his longtime friend Dr. Steve Woolson and his daughter, Lydia Doyle was his “Groom’s Woman” and she walked him down the aisle. Lydia’s son John (2) was our ring bearer (ultimately carried down the aisle by his father Matthew Doyle.) 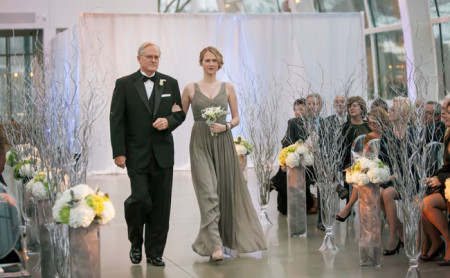 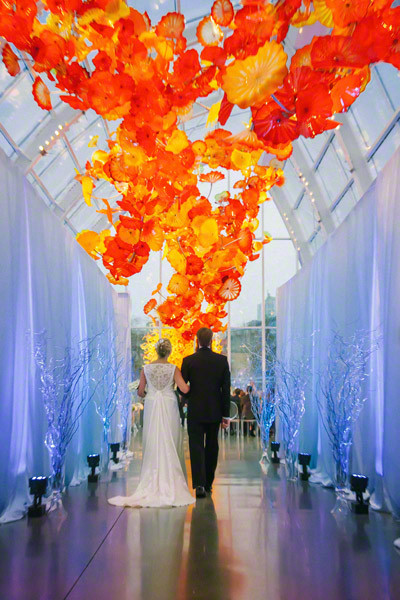 Immediately following the ceremony, guests were taken on tours of the Chihuly exhibits at the Garden and Glass. To say they were stunned is an understatement. We followed the tours with a reception and sit down dinner and dancing. 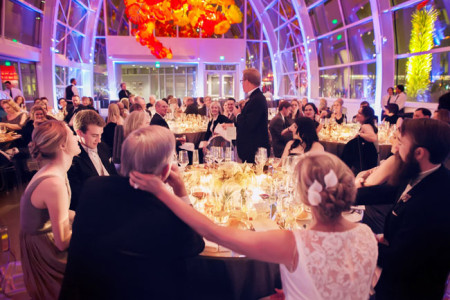 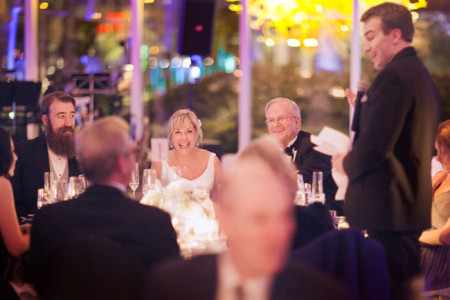 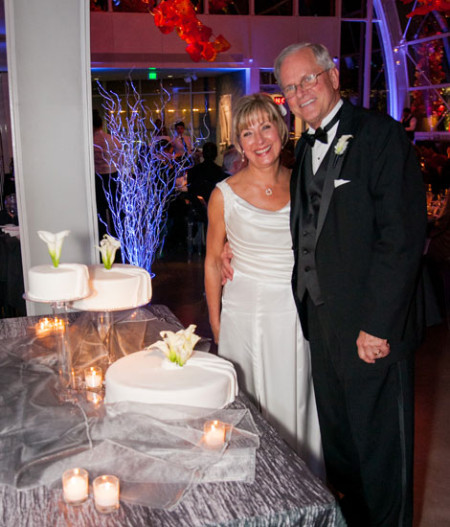 About 11:00, we took our guests up the Space Needle since we had been reveling in the shadow of this Seattle icon for the evening. In classic Seattle form, the fog had rolled in by then and there was not much to see above the first deck but guests had a great time with the elevator ride.

Once back in the hall, I sang a solo, “Feels Like Home to Me” to Rick with the accompaniment of the Michael Benson Band. I think I stunned my new husband and surprised our guests who had no idea that I sing.

At the close of our evening, Rick had arranged to have us taken back to the Marriott Presidential Suite by a chauffeur in a classic car, a white, 1950 Bentley. When we arrived in the suite, Rick had four vases each with two dozen roses, lavender, red, white and peach, each for a different sentiment and promise to me. 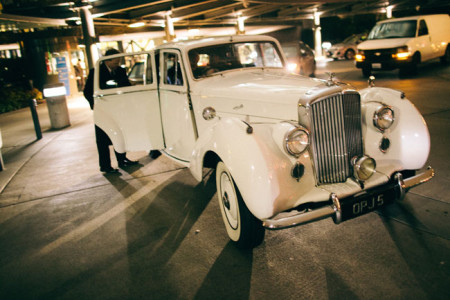 Sunday we hosted a private Super Bowl Party (Rick, our families and friends and I are all avid football fans.) at Blueacre Seafood. They were amazing and accommodated us with additional TV screens and a wonderful menu of food items and drinks suitable for Super Bowl watching 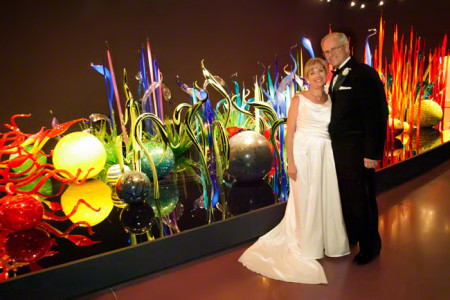 Did you use any local vendors who made your wedding particularly special and memorable?

We used all local vendors:

Thank you to Clane Gessel for helping us share this Real Wedding Story! 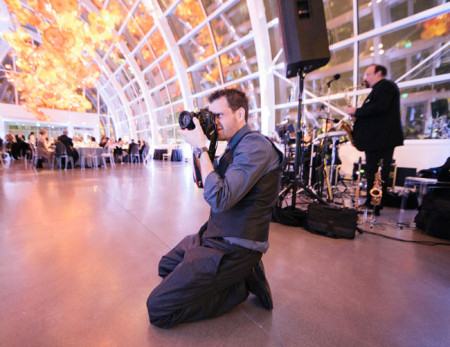